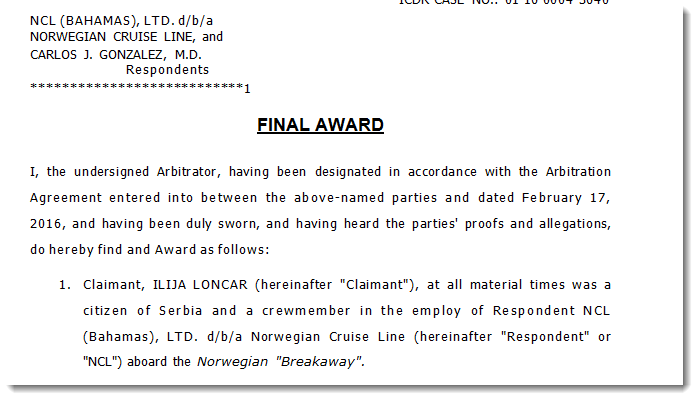 FINAL AWARD
I, the undersigned Arbitrator, having been designated in accordance with the Arbitration Agreement entered into between the above-named parties and dated February 17, 2016, and having been duly sworn, and having heard the parties’ proofs and allegations, do hereby find and Award as follows:

1. Claimant, ILIJA LONCAR (hereinafter “Claimant”), at all material times was a citizen of Serbia and a crewmember in the employ of Respondent NCL (Bahamas), LTD. d/b/a Norwegian Cruise Line (hereinafter “Respondent” or “NCL”) aboard the Norwegian “Breakaway”.

4. The parties have agreed that the substantive law to be applied to this dispute is Bahamian law. Arbitration Agreement at Article 30, Paragraph 1, Claimant’s Amended Notice of Arbitration, at Paragraph 6, and Joint Statement on Arbitration Procedure, dated Nov. 18, 2016, at Paragraph 2.

6. Prior to his employment with NCL, Claimant worked as a carpenter in his native Serbia.

7. Claimant sustained injury to his right (dominant) upper extremity on March 28, 2016, while aboard the Breakaway, and said injury eventually led to a below the elbow amputation of that extremity in April of 2016.

8. The cause of that injury, whether Respondent’s medical personnel fell below the standard of care in treating Claimant, and damages, are the subjects of this Arbitration.

CAUSATION
66. Claimant demonstrated an immediate adverse reaction to the Promethazine injection on March 28.
67. Claimant developed Compartment Syndrome, and it began sometime after the Promethazine injection was administered by Nurse Oracion.
68. Promethazine is a caustic medication (vesicant).
69. Promethazine was the cause of Claimant’s injury.
70. There is significant disagreement among the experts as to how and when the Promethazine escaped from Claimant’s right median cubital vein and into the surrounding tissue.
71. Claimant’s counsel stipulated prior to the Final Hearing that there was vasculitis, but no extravasation. See Claimant’s Response in Opposition dated 1/17/18 (at page 11) and the Order of this Tribunal dated 1/18/18 (at paragraph 1).
72. Upon reviewing all the expert testimony and evidence offered on this issue, including the testimony offered BY Drs. Cossman, Rollins, Aranson and Villa, in combination with the facts and circumstances surrounding the Promethazine injection as described by Nurse Oracion and Mr. Loncar, the inescapable conclusion of this Tribunal is that the medication was pushed too fast and in a manner that fell below the applicable Standard of Care, resulting in an intra-arterial injection as described by Dr. Cossman at page 21 lines 10-25 of his deposition, at page 95 line 14 through page 96 line 12, and at page 97 lines 5-8.
73. As a direct consequence of the too-fast push and the resulting Compartment Syndrome, Mr. Loncar endured weeks of excruciating pain, multiple surgical procedures, and eventually the loss of his dominant right arm, just below the elbow.
DAMAGES
74. At the close of Claimant’s case, Respondent moved for a Directed Verdict on the claim for punitive damages, and this Tribunal reserved ruling. That Motion was
renewed at the close of the case, at which time Respondent’s Motion for Directed Verdict on the claim for punitive damages was GRANTED, as this Tribunal found no evidence that Respondent’s care and treatment of Mr. Loncar was wanton or willful or malicious or deliberately indifferent. To the contrary, all the evidence and testimony indicates that Dr. Campuzano (or other medical personnel from NCL) remained at Claimant’s bedside for the better part of the overnight hours, monitoring his condition and massaging his arm. While clearly negligent in selecting and administering Promethazine, and in failing to obtain a timely vascular consult, and in failing to timely medevac the Claimant from the vessel, Respondent’s conduct does not rise to the level of gross negligence or outrageous behavior in the eyes of this Tribunal.
75. Claimant received Maintenance, and thus his claim for past Maintenance was abandoned by a stipulation on the record at the Final Hearing.
76. Similarly, any claim for Cure is moot, as Respondent has paid all of Claimant’s medical, therapeutic and hospital expenses up to (and beyond) the point when Mr. Loncar reached maximum cure.
77. However, recovery of Maintenance and Cure does not bar recovery for personal injuries. Pacific S.S. Co. v. Peterson (1928) 278 US 130, 138.
78. The measure of personal injury damages includes past and future economic losses, loss of earning capacity, medical expenses, and pain and suffering. Levine v. Zapata Protein (USA), Inc. (E.D. La. 1996) 961 F.Supp. 942, 945-947.
79. Mr. Loncar is a 30-year old gentleman with a life expectancy of 48 years.
80. Mr. Loncar’s prosthesis will require periodic maintenance and replacement over the course of his lifetime, the cost for which Respondent is liable.
81. However, the opinions offered by Claimant’s expert (Anthony M. Gamboa, Jr., Ph.D., MBA) regarding the present money value of the prosthetic lifetime cost (see his Report dated 5/31/18) are inherently unreliable, as Dr. Gamboa utilized United States statistics to calculate the damages of a Serbian national who lives and works in Serbia.
82. Thus, while the future need for periodic maintenance and replacement of Claimant’s prosthesis is without question, the cost of such maintenance and replacement in the future rests within the discretion of this Tribunal.
83. After consideration of all recoverable claims, the Tribunal finds that Claimant has sustained and will sustain the following damages:
a. Past pain and suffering: $ 337,500.00 USD
b. Future pain and suffering, loss of earning capacity,
and medical expenses (including prosthesis): $3,000,000.00 USD
TOTAL DAMAGES (a and b, above): $3,337,500.00 USD
84. As the Tribunal has awarded no damages for Maintenance and Cure here, Claimant is not entitled to recover attorney’s fees.
85. Pursuant to Article 34 of the International Arbitration Rules, Claimant’s counsel has established to the satisfaction of this Tribunal that they incurred $173,214.74 USD in recoverable/taxable costs in preparation for and presentation of this Arbitration.
86. For the reasons set forth above, I Award as follows:
a. Respondent shall pay to Claimant the sum of $3,337,500.00 USD, representing the grand total of the awarded damages.
b. Claimant’s request for attorney’s fees is denied.
c. Respondent shall pay to Claimant’s counsel the sum of $173,214.74 USD, representing the recoverable/taxable Arbitration costs.
d. The administrative fees and expenses of the International Centre for Dispute Resolution (ICDR) totaling $8,000 USD shall be borne by Respondent, and the compensation and expenses of the arbitrator totaling $27,000 USD shall be borne by Respondent.
e. This award is in full settlement of all claims submitted to this Arbitration. Any claims not expressly granted are hereby denied.
I hereby certify that, for the purpose of Article I of the New York Convention of 1958, on
the Recognition and Enforcement of Foreign Arbitral Awards, this Final Award was made in Miami, Florida, USA.
Miami-Dade County, Florida this 13 day of June, 2018.
Peter E. Abraham, Esq.
State of Florida County of Miami-Dade
I, Peter E. Abraham, Esq. do hereby affirm upon my oath as Arbitrator that I am the individual described in and who executed this instrument, which is my Final Award.
Dated: June 13.2018.
Peter E. Abraham, Esq.
State of Florida County of Miami-Dade

This site uses Akismet to reduce spam. Learn how your comment data is processed.